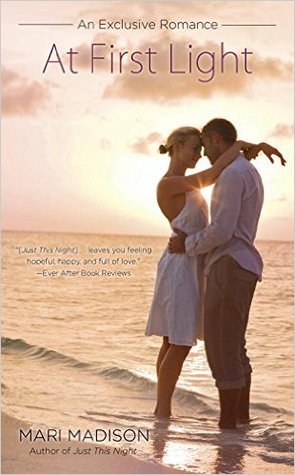 At First Light by Mari Madison

After five years of reporting in war-torn Syria, Troy Young is back in his hometown of San Diego. Readjusting to life back home is proving difficult. He keeps having panic attacks during live shots. But he s given one more chance as an entertainment reporter doing a He Said, She Said review segment. It s not what Troy had in mind especially when he discovers who his new partner is.

Movie-obsessed Sarah Martin loves her new gig at News 9…until the man who broke her heart enters the studio. Still, the desire between Sarah and Troy has not subsided even if he did pick his career over her. She doesn t want to trust him again but they ll need to overcome their off screen tension if they hope to handle the drama that s about to unfold…

{Waiting On} Eight Ways to Ecstasy by Jeanette Grey (90)

{Waiting On} Once and Always by Julia Harper (42)