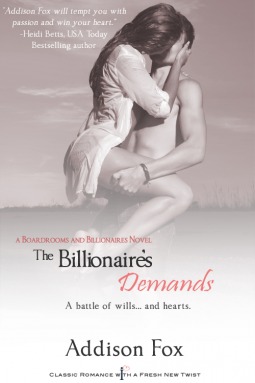 Booth Harrison has made a habit of getting what he wants, be it a new addition to the Harrison media empire, or a better relationship with his half-brother. But meeting his brother’s new sister-in-law, Camryn McBride, poses a new challenge. The savvy CFO of McBride Media has a brain he wants to pick…and a body he needs to claim.

Camyrn has spent the past few years helping to rebuild her family’s magazine company, focusing on that rather than her disastrous personal life. But when Booth Harrison invites her to be the keynote speaker at a sales conference in Hawaii, she’s tempted to combine business with pleasure.

But meeting the billionaire’s demands won’t be easy, because someone doesn’t want a merger between them to happen.

Erin: The Billionaire’s Demands is book 3 in Addison Fox’s Boardrooms and Billionaires series but you don’t need to have read the previous books in order to enjoy this one. Like the other books, this one focuses on one of the McBride sisters – Camryn. We also meet Booth, a man who knows what he wants in both business and his personal life.

An invitation to Camryn to speak at a sales conference in beautiful Hawaii sets these two on a path toward one another. Booth has always wanted Camryn and now he has his chance. I liked that Camryn is smart, focused on her job (too focused as the sad state of her personal life will attest). Booth plans on using their trip as a chance to show Camryn he is more than his image portrays him to be, and he can be the man she needs.

The beginning of the book started off a bit slow, but steadily picked up the farther along I read. I liked Camryn and her no-nonsense attitude and I liked Booth. There was a lot of chemistry between these two and that kept me turning the page. The book is well-written and once the story picked up, it sure kept on going. Again, there isn’t anything new going on in the book (but the cover sure is great!), but this is definitely a good, old-fashioned romance that’s sure to please. {Review} Until Tomorrow by Annie Kelly