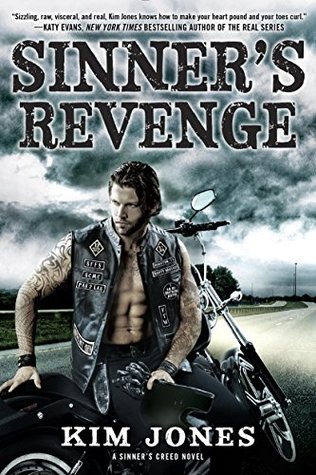 Shady has spent the last eight years of his life dedicated to the Sinner's Creed Motorcycle Club. But after losing the man who was both his brother and his best friend, he has a new purpose—to avenge the death of the greatest nomad in Sinner’s Creed history.

His plan is flawless. His mission is simple: seek and destroy. There is no room for distractions—especially a distraction like Diem.

She's infuriating. Demanding. Complicated. Impossible. And for some reason, Shady can’t stay away. But he only has space in his heart for one love: Sinner’s Creed. And the club always comes first. Always.

Erin: MC books are a bit hit or miss these days. Some don’t work quite so well, and others, well, they get it so right you can’t put the book down. Such is the case with Kim Jones’s Sinner’s Creed series. Book 2 of the series, Sinner’s Revenge was every bit as intense and suspenseful and gritty as the first and picks up right where book 1, Sinner’s Creed left off. As such, this one isn’t a stand alone, but rather a sequel, so reading book 1 is a must .

*That being said, this review will probably have spoilers in it, so stop right now if you haven’t read Sinner’s Creed because we don’t want to ruin anything because trust us, you definitely don’t want that.*

We’ve been anxiously waiting on Shady’s story since the end of Sinner’s Creed. Knowing he would be set on avenging Dirk’s death had us on the edge of our seats wondering what would happen. He’s always been so devoted and loyal not only to his MC but to his family of “brothers” that there was no way he’d do anything but go after the men who killed his best friend. We didn’t expect him to cross paths with someone like Diem, though. She’s so intense and the relationship that develops between her and the man she knows as Zeke (Shady’s adopted persona while he plots his revenge) is passionate, if not borderline insane. We mean that in the best way possible, but these two are not your normal romantic couple. We’re not sure HOW exactly these two work, but trust us when we say they more than do. She’s feisty as hell, he’s sexy and broody and a tad dangerous.

This book has it all. Plenty of action. A kick ass plot that moves at a frenetic pace. Totally captivating characters with insane amounts of sizzling chemistry. Snarky, sharp dialog and sex scenes so steamy it’s a wonder our screens didn’t melt. We are definitely going to be counting down the days until book 3 for sure! {Review} The Deeper He Hurts by Lynda Aicher

{Review} Date on the Run by Jill Monroe

{Review} Not My Boyfriend by Monica L. Anderson

{Tour} More by Sierra Kincade (with Dreamcast, Excerpt, and Giveaway) {Review} Sleeping with Her Enemy by Jenny Holiday {Interview} with Jamie Howard, author of Until We Break (with Review)