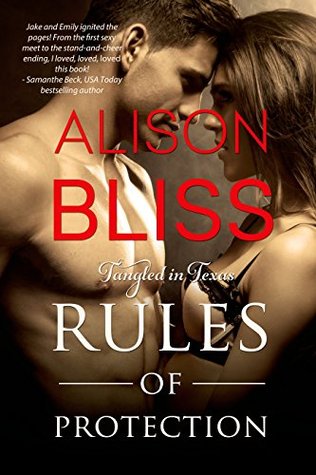 It’s rule breaker Emily Foster's birthday, and like everyone at The Jungle Room, she just wants to get some action. Unfortunately, she stumbles on the wrong kind, witnessing a mob hit. To protect her, she’s entered into the Witness Protection Program with by-the-book Special Agent Jake Ward as her chaperone.

When the location of their safe house is compromised, Jake stashes Emily deep in the Texas backwoods. The city-girl might be safe from the Mafia, but she has to contend with a psychotic rooster, a narcoleptic dog, crazy cowboys, and the danger of losing her heart to the one man she can’t have.

Jake's as hot as he is infuriating, and she can't help but push all his buttons to loosen him up. Their mutual, sizzling sexual attraction poses a dilemma: Jake’s determined to keep her safe and out of the wrong hands; she’s determined to get into the right ones—his.

Erin: If you’re looking for something fun with a side of suspense, look no further than Alison Bliss’ new book, Rules of Protection. This is the first book of a new series and Alison Bliss starts off with a bang. I mean, what could be better than a sassy heroine who is an unwilling witness to a mob hit coupled with the badass Special Agent that’s been assigned to protect her? Sounds pretty great, huh?

These two were so much fun. Hot and sarcastic and with smoldering chemistry. Emily was way more than Jake expected, and even more trouble. Sure there are plenty of things going on that are a bit over the top but the witty banter, on top of the sexual tension between our hero and heroine made it so these little issues won’t bother you too much. All in all I found this an enjoyable, if unrealistic, read and will definitely be checking out more in the series. {Review} For His Pleasure by Suzanne Rock

{Review} No Turning Back by HelenKay Dimon

{Review} Upside Down by Lia Riley (with Excerpt and Giveaway)

{Review} I Need a Hero by Codi Gary

{Review} Us by Sarina Bowen and Elle Kennedy
Share