{Review} For Seven Nights Only by Sarah Ballance 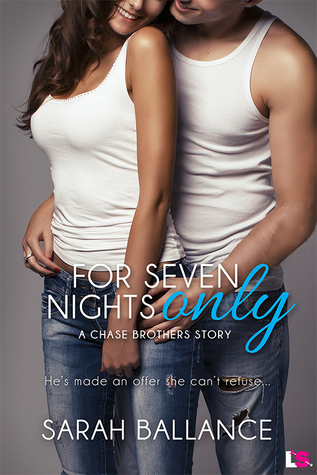 Kelsie Reed is over bad luck and bad men. Newly dumped, she’s now the pathetically single maid of honor in her sister's wedding—and her ex is the best man. Her bad luck continues when a plumbing meltdown in her apartment sends her sexy neighbor running to her rescue. He’s got "serial dater" written all over him, which is unfortunate because the man is hot.

Sawyer Chase loves women, but settling down? He’ll leave that to his brothers. But when Kelsie confesses she’s a dating disaster and is about to become the laughing stock of her family wedding, Sawyer takes control. He's got one week to teach her how to land the man of her dreams, and he’ll do it on her terms: no touching, no kissing, and definitely nothing more.

But some rules need to be broken, especially when, for once, there’s something on the line worth fighting for…

This book was okay. The idea for it didn’t make sense to me, but I liked Sawyer and Kelsie, who were funny and had good chemistry. I just thought they weren’t right for each other. Kelsie was condescending and Sawyer got to be a little overbearing. But this is a very fast read and if you like these types of stories, you’ll probably like this one, too.

{Review} Kiss and Make Up by Faye Robertson

{Review} Five Things I Love About You by Sarah Ballance

{Review} A Change of Plans by Robyn Thomas

{Review} Burn It Up by Cara McKenna

{Review} Giving In by Maya Banks

{Review} What I Love About You by Rachel Gibson

{Review} Every Part of You: Takes Me by Megan Hart