We were so excited to be invited to participate in the blog tour for The Devil You Know by Jo Goodman. We’ve got an excerpt to share with you, along with a giveaway. First, here’s the 411 on The Devil You Know: 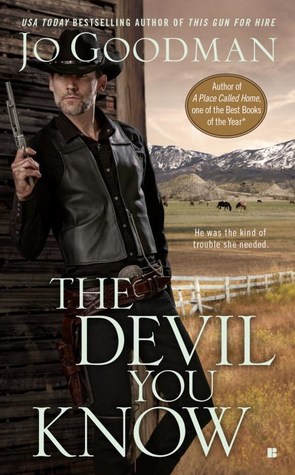 The Devil You Know by Jo Goodman
Published by Signet on May 3, 2016
Genres: Historical Romance
Character(s): Cowboys
Pages: 416
Goodreads  Buy the Book

From the USA Today bestselling author of This Gun for Hire and one of today's “premier western romance writers,”* a captivating new Western historical romance . . .

After a horse drags him through the countryside, Israel McKenna awakes bruised and battered in a field in Pancake Valley, Colorado. He can recall where he came from and where he was going, but the memory of how he came to be on the Pancake homestead eludes him. He’s certain he did something wrong to deserve such a harsh punishment—and so is the beautiful woman who reluctantly comes to his aid.

Wilhelmina “Willa” Pancake must focus on running her family’s ranch. With Israel’s hazy memory, she is unsure if she can trust him, let alone handle the budding attraction between them. And as men fight to steal her land and the truth about Israel’s past rides toward them, love is a risk she cannot easily take.

Willa parted the faded blue gingham curtains and peered out between the panels. Well, she thought, surveying the moonlit scene that confronted her, she had found John Henry and solved the mystery of why the traitorous dog had not made a sound.

He was cradled like a baby in Israel McKenna’s arms having his belly rubbed and no doubt being told what a very good dog he was.

She wanted to bang her forehead against the glass but feared that the percussion would wake Annalea. Instead, she carefully raised the window a few inches and knelt on the floor so she could speak through the opening.

“What are you doing here?” she whispered. “And don’t tell me you’re returning John Henry. I won’t believe you. You probably stole him in the first place.”

Israel stepped closer to the window. “I want to talk to you.” His dark brows lifted a fraction. “Did you just growl at me?”

Keep Reading the Excerpt for The Devil You Know

Keep Reading the Excerpt for The Devil You Know

She thought she might have, but she was not going to admit it. “I’m coming out,” she hissed. “And I’m taking John Henry back!”

She closed the window with more authority than she’d intended and immediately looked over her shoulder to see if Annalea was stirring. She was not. Willa rose, and the curtains fell back into place, but not before Israel snared her attention with his careless and charming grin.

She quelled an urge to stick her out tongue because it was immature, and lacked dignity. That, and he could no longer see it anyway.

Willa shrugged into her heavy woolen robe and belted it tight. The hem of her flannel nightgown fluttered around her ankles as she hurried to the kitchen to find her boots. She sat down to yank them on and then bounced to her feet as though she had springs in her knees and was out the door moments after that.

Israel was not waiting for her on the back porch. Was he still loitering outside her window? Willa ignored the steps and jumped off the side of the porch and walked around the corner of the house. Israel was still there, although he had moved about four yards back from the window. She supposed that was his idea of being discreet.

Willa employed long strides to reach him, and when she did, she held out her arms for John Henry. One of the hound’s long, black-tipped, brown ears was draped over Israel’s arm, and his belly was still exposed. He would probably howl if Israel passed him over now. Willa dropped her hands to her sides and was immediately beset by a shiver. She folded her arms in front of her and tucked her hands under her armpits. In another moment, her teeth would begin to chatter.

He looked her over. “We can’t really talk here, can we? You’ll freeze.”

“Exactly my thought. Hand over John Henry so I can go back inside.”

“I’ll put John Henry in the house, but you and I are going to talk in the barn.”

“I’m not going into the barn with you.”

“Why not? We were there this afternoon.”

“That’s right. It was afternoon, not the middle of the night.”

“It’s not the middle.” He stopped scratching John Henry’s belly to put up a hand to halt her protest. “All right. I’ll concede that it’s night. My point is that it is a difference without distinction. We’ll have privacy and warmth in the barn just as we had earlier.”

“Yes, but—” She hesitated, glanced warily in the direction of the barn, which loomed like a great black hulk against the night sky, and then shook her head. “It’s not a good idea. Whatever it is, it can wait until morning.”

“Not if I am going to be able to sleep tonight.”

If he had reported this to her as a complaint, Willa would have summarily dismissed it, but it was not issued as a grievance, only as a matter of fact, and since she had some experience with sleepless nights of late, she had a measure of sympathy for this state. Some of that must have shown in her expression because he angled his head toward the barn and lifted his brows once more in question.

“All right,” she said at last. “But let me put John Henry in the house first.”

“I don’t think that’s a good idea. John Henry should come with us. You can take him back when we’re finished. Besides, if someone wakes and wonders where you are, you can say you were looking for him.”

It seemed reasonable, but that only made Willa question the soundness of her thinking. “I don’t think anyone is going to miss me,” she said, falling into step beside Israel. “Pa was tippling last night, so he won’t wake until coffee’s on, maybe not even then. And Annalea slept through you scratching at the window.”

“That was John Henry.” Israel took one of the hound’s short forepaws in his hand and waved it at Willa.

A bubble of laughter swelled in her throat and she snorted softly to cover it. “I don’t understand you,” she said when she could trust herself to speak. “Is there anything you take seriously?”

“Is there anything you don’t?”

Jo Goodman is a licensed professional counselor working with children and families in West Virginia’s Northern Panhandle. Always a fan of the happily ever after, Jo turned to writing romances early in her career as a child care worker when she realized the only life script she could control was the one she wrote herself. She is inspired by the resiliency and courage of the children she meets and feels privileged to be trusted with their stories, the ones that they alone have the right to tell.

Once upon a time, Jo believed she was going to be a marine biologist. She knows she is lucky that seasickness made her change course. She lives with her family in Colliers, West Virginia.

Win a copy of The Devil You Know by Jo Goodman! Just leave a comment below, letting us know that you’d like to win. (US Only) {Review} Madame X by Jasinda Wilder (with Excerpt and Giveaway) {Interview} with Jackie Copleton, author of A Dictionary of Mutual Understanding {Interview} with Katie Ashley, author of Redemption Road (with Review and Giveaway)

{Tour} Alissa Johnson Has A Talent For Trickery (with Giveaway) {Review} The Secret by Julie Garwood