You guise. You know how much bad boys make us weak in the knees, and we love thrillers! When we found out about this very unique series, we know we wanted to jump on the tour wagon! We’ve got a great guest post from romantic suspense author Tyler Anne Snell, who shares her thoughts on villainy and what makes a great bad guy. *jumpyclaps* We’ve also got a great giveaway to share with you today and upcoming reviews of all of the books in the series. We won’t make you wait any longer–let’s get right to what Tyler Anne Snell has to say

When people ask me what my favorite part about my first Harlequin Intrigue, Manhunt, was I usually answer with one thing. The villain. As someone who loves to read, play video games, and watch probably a little too much T.V., I’ve been seeing examples of all types of “bad guys” throughout the years. While some would argue that a good “bad guy” isn’t as important as a good “good guy,” I’d have to completely disagree!

In my opinion, villains—great villains—create circumstances that show readers who protagonists really are. What they are truly made of and how they endure. Their acts of violence, malice, and general lack of apathy for others force our heroes and heroines into a position that often makes them face a part of themselves they normally wouldn’t have to. In that way readers get to see their “true colors,” and that in itself makes any positive outcome that much more satisfying for those of us who have followed them through the good and bad.

Now, what is my idea of a great villain?

First and foremost, a terrifying and nearly unstoppable villain can be in some respect relatable. His or her origin story isn’t that different from our own. The thing that separates us from them is the few choices we made differently along the way. That’s what makes him or her so chillingly scary. The hero or heroine just as easily could have been the bad guy. They simply took an altered path for one reason or the other.

The second trait of my ideal villain is cleverness. Not just smart, but also cunning. Able to use information, people, and the situation to his or her advantage making the hero or heroine often two steps behind. Being methodical and prepared as well falls into this trait. If you want me to, as a reader, believe that a villain is dedicated to outwitting the hero or heroine, then he or she better have prepared in some way to try and achieve this goal.

Which brings me to my third ideal trait for a great villain. Her or she is determined to a fault. They want to achieve something so badly that it often blinds them to the morality issues of what they’ll do to make that happen. Or, maybe more adequately, they see the bad in what they are doing and don’t care to stop. What’s more terrifying than a bad guy who believes what he is doing is the only thing he needs to be doing? What’s more, a bad guy who believes without a doubt that his way is the right way.

In the end, to me, a villain is truly terrifying when you realize her or she was once just a normal person who now happens to believe in something so badly that they’ll stop at nothing to realize their goal.

I crave a bad guy that isn’t just this immovable object that the hero beats against until he’s won. A truly fantastic villain is fluid, adapting to change, and truly a formidable challenge, not only physically but emotionally as well.

I believe that no story can be great without a great villain and Tough Justice has that in spades! Agent Lara Grant and Co. find this out the hard way! Tyler Anne Snell writes and reads a little bit of everything but has a soft spot for thrillers, mysteries, and sexual tension. When she isn’t writing or reading, she’s re-watching her favorite TV series or playing video games. The first book she finished in one sitting was a Harlequin Intrigue. It taught her to appreciate the power of a good book.

Tyler lives in Florida with her same-named husband and their mini lions.

Justice is worth every sacrifice…

FBI Agent Lara Grant has finally put her life as an undercover operative behind her and started a new assignment in New York City. But her past and present collide and become ever more twisted as a spate of murders send a message that is cruelly, chillingly personal…

Get part 1 of Tough Justice, EXPOSED, for FREE! 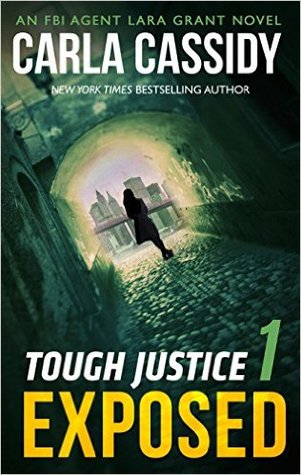 The amazing team at Harlequin is offering up a $25 Amazon gift card to one lucky winner!Please enter via the Rafflecopter form. Giveaway is open internationally.
a Rafflecopter giveaway

Good luck, Pretties! Don’t forget to follow along the fabulous Tough Justice Tour and be sure to check out all the deets on Kismet’s Tour Page. {Interview} with Anna del Mar, author of To The Edge (with Giveaway) {Review} The Frenchman by Lesley Young (with Giveaway)